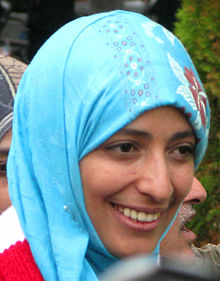 Renowned activist and press freedom advocate Tawakul Karman to the Yemen Times:
“A day will come when all human rights violators pay for what they did to Yemen.

She believes that peaceful advocacy and struggle without public demonstrations and sit-ins is useless. This is why she is the leader of the protest every Tuesday on “Freedom Square” in Sana’a. She advocates for change on many fronts, and takes up the defense in support of almost every cause. Although she is very much visible in the internal arena through her work, her recognition came from abroad as she was awarded the International Woman of Courage in March 2010. She is one of only 13 women members on the Shura Council of the Islah opposition party. She is a journalist, an activist, a freedom fighter, a wife and a mother of three. 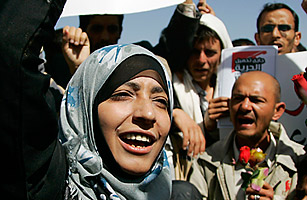 Since May 2007, Tawakkol Karman has been leading demonstrations and sit-ins in front of the cabinet to defend human rights. In Yemen’s male dominated conservative society, women do not have much presence in the public sphere. However, those who do participate in public life, especially in politics, have earned their place 110 percent. Gradually women activists created alliances while keeping space for specialization and individuality. This is why perhaps when it comes to taking to the street, the first name that comes to mind is Tawakkol Karman.

The journey has just started

“We will continue our protests every Tuesday without fail until oppression ends in Yemen and people are free to enjoy their human rights,” says Tawakul passionately. This is a big promise to make, yet she feels that she and her supporters in and outside the Women Journalists Without Chains organization that she established in 2005, will be there to ensure Tuesday demonstrations happen without fail.
Women Journalists Without Chains (WJWC) is a non-governmental organization that works towards promoting civil rights, particularly freedom of opinion and expression, and democratic rights. “We also promote utilizing different media outlets to promote education, culture, thought and comprehensive community development by focusing primarily on women’s issues, children’s issues and promoting principles of good governance and anti-corruption.”
Although the organization was created for the defense of journalists and media rights initially, it quickly expanded its scope to include all rights. As she puts it, “you cannot separate one right from another.”
However, her actual confrontation with the state took place when the Ministry of Information refused to grant WJWC a license to issue their publication. Now Tawakul is not only demanding a paper, she has also added a radio station to the list of demands.
As expected she received threats and temptations from state authorities in order to get her to back off. “I was threatened through phone calls, letters, and other means of communication. I was threatened to be imprisoned and even killed. So far, the threats have not been fulfilled although I consider that taking away my right to expression is worse than any form of physical violence,” she says.
Tawakul’s organization had started an SMS service to mobile phones through which her organization sent news on human rights within the country. Soon after this service became popular the Ministry of Information ordered the Ministry of Telecommunications to cancel the permission, and so WJWC could no longer tell people through mobile phones the human rights news of the country.
In the meantime, the state seems to use the carrot and stick approach and according to Tawakul she has also been promised much. She was promised a position in government as well as financial compensations to which she said no.
Her dream is for Yemen to become a democratic, free, and prosperous country where everyone enjoys equal rights.
And her struggle with the government, especially the Ministry of Information, seems to be eternal.
“It is not only my struggle with this ancient ministry. It is every Yemeni’s problem. One look at the Yemeni Satellite Channel and you know why. The old ideology of worshiping the ruler is persistent in the minds of our official media leaders and not much progress in the media will happen until the mentality of its leaders change,” Tawakkol karman insisted.
She blames the Ministry of Information for the creation of a special court for the persecution of the media which was established in 2009 and is dedicated to trying journalists and newspapers. The ministry is also proposing a draft bill for broadcast media such as radios, television and websites.
Tawakul does not have a very favorable opinion of this bill and has called it a tool for manic control on media and expression.
“What I don’t get is, how does the Minister of Information believe he can control the media in a time where hundreds of satellite channels reach Yemeni televisions across the country without needing permission from the ministry?” she exclaimed.
Through close scrutiny of the bill, Tawakul discovered many odd articles such as one that allows the minister to take out 10 percent of the revenues coming to the Ministry of Information through license and registration fees of visual and audio media. According to the article, the ten percent go to a special fund controlled by the minister. She argues that this is a direct violation of the financial legislation of the ministry which dictates that all revenues must go to the ministry’s account at the central bank.
Other articles in the bill allow the minister to penalize and carry out actions against any media organization without needing to go through the legal system or through a judiciary verdict.
But what strikes Tawakul more in her reading of the proposed bill, is the astronomical fees required for the licensing of any television channel, radio station, or even website.
“Can you believe that if a new media website is to be created they have to pay more than USD 100,000? Which journalist has that kind of money considering Yemen’s conditions?” demanded Tawakul.

In March this year, Tawakul Karman was invited to New York in the US to receive the International Women of Courage Award, along with another nine women from all around the world.
US State Secretary Hillary Clinton and First Lady Michelle Obama awarded Tawakul her exceptional leadership and courage in the area of women’s rights and equality.
Although she is not doing what she is for personal gain or propaganda, she appreciates the recognition and takes pride in it. She would have wanted her own country to appreciate her and her government to work with her for the sake of the whole country’s development.
“Yet to think about it, had my country appreciated me I would not have gone to the streets demanding change and would not have received this award,” she laughed.
Perhaps one of her most daring actions was when she put up a black list of the names of the most “anti-free press” people in Yemen.
“I promise all those people who used their position to unjustly hurt others and prevent people from exercising their rights that one day they will be tried in front of the law and made to pay for their wrong doings,” she said.
She put the list on banners and stuck them on walls and high buildings and on the list were the names of the Minister of Information, the Political Security director, the National Security director, the Minister of Interior, and others. She promises an updated list to come out soon with more names.
In her acceptance note, she thanked all her supporters and especially her father Abdul-Salam Karman, a well-known politician and activist. It is because of him that she has become the conscious activist she is today. And she refers her legal and rights based education to her father who used to be Minister of Legal and Parliamentary Affairs.
She also is grateful to her husband and three children who support her work and her brothers and larger family.
“I thank my family for supporting me and believing in me, without them I would not have been able to do anything,” she said.

Taking off the veil

Tawakul started her public activities as a veiled woman as many Yemeni women cover their face regardless of their occupation. With time, she decided the “niqab” was not helping her to be as effective in communication as she wanted to be. One day she was presenting a working paper on human rights at a conference in 2004 when she simply took her niqab off and went to the podium with her face uncovered for the first time in her adult life in public.
“I discovered that wearing the veil is not suitable for a woman who wants to work in activism and the public domain. People need to see you, to associate and relate to you. It is not stated in my religion [Islam] to wear the veil, it is a traditional practice so I took it off,” she explained.
Although she admits it was a difficult decision, she has accepted it and moved on and does not regret it at all. She even calls other women and female activists to take theirs off.
There are many Yemeni women who are active in the public and political sphere and, according to Tawakul, they are more sincere than the men because they have to be twice as good in a patriarchal society.
The problem is that active women undergo double oppression as a woman and as an activist, because our society does not accept women to lead in public life or to be visible.
“As it is being part of the democratic process is very difficult for both men and women, especially if the position the activist or politician takes is against the state or influential bodies. So imagine what it would be like for women who are already oppressed just because they are born as women?”
This is why she advises all activists, men and women, to never give up and to work together so that they are able to make real change. Encouraging freedom of expression, she sees, is the first and far most important way to achieve change in a society.
She called on those in media and activists to take to the streets and not just sit there in their offices. They should demonstrate and protest and not feel afraid because “fear paralyzes us and we need to get moving.”
Her special advice for women is not to wait for permission before they demand their rights. There is a large number of educated women who are qualified and capable and they should participate in the public and political life.
“Women should stop being or feeling that they are part of the problem and become part of the solution. We have been marginalized for a long time, and now is the time for women to stand up and become active without needing to ask for permission or acceptance. This is the only way we will give back to our society and allow for Yemen to reach the great potentials it has,” concluded Tawakkol Karman 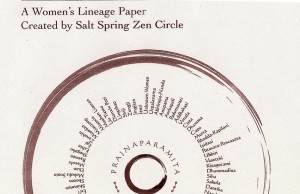