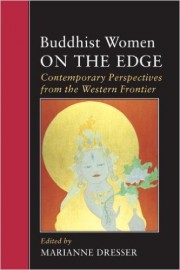 1996 – Marianne Dresser brings together the likes of Pema Chodron, Tsultrim Allione, and Bell Hooks, 30 women in all, who are doing just that. Writers, nuns, scholars, priests–even a martial arts master and a private investigator–discuss women in Buddhism in a range of essays. Several pieces question the suppression of emotion required for selflessness, appealing to the undeniable reality of day-to-day living. Others discuss their experiences as women in Buddhism, whether as nuns or as lay practitioners. Still others address the history of women in Buddhism, racial questions, meditation, poetry, compassion, social activism, and sexual orientation. Most of these writers have been in Buddhism for two or three decades and offer a wealth of experience and insights, targeted at women readers but no less valuable to men.

« This book has 30 essays, some by well-known authors-Thubten Chodron, Tsultrim Allione, & rarely anthologized Pema Chödrön, in a wide range of topic, approach, & quality. IMHO, most are quite fine; a few are not. There are feeling-oriented ones such as Sallie Jike Tisdale’s touching personal feelings about gender in a Zen sangha, Sandy Boucher’s delightful sketch of Ruth Denison, & Melody Chavis’ poignant essay on avowing karma. There are more thinking-oriented pieces too: p. xvi: Jan Willis: « The question of what Buddhism has to offer African Americans and other people of color may not be as important as what such people have to offer Buddhism in America. » p. 3: Miranda Shaw: -Ancient Indian Tantra « merged with Buddhism in about the 9th century C. E. resulting in what we now call Tantric Buddhism or Vajrayana. » & p. 6: « Translating Tantric material is a process of inspiration & revelation as well as linguistic skill. » Some are on the cusp: psychologist Anita Barrows addresses Buddhist approaches to anger (e.g. Thich Nhat Hahn’s simplistic approach, Theravada vs. Vajrayana, & E-W differences), p. 72: Marilyn Senf: « It is interesting, to say the least, that it has usually been easier for many Buddhists to empathize with the suffering of ants or mosquitoes than with the plight of women! » And p. 129: Alta Brown-« Without wisdom, compassion is blind. It may become another vehicle by which the `I’ expresses, defends, & aggrandizes itself. » However, some essays had objectionable, IMHO, value judgments/personal agendas. But, p. xvi & p. 299: Pema Chödrön: « It would kill the spirit of Buddhism if it became uncomfortable or dangerous for people to hold opposing views. » 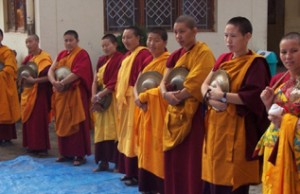