Women played major roles in the history of Buddhist China, but given the paucity of the remaining records, their voices have all but faded. In Daughters of Emptiness, Beata Grant renders a great service by recovering and translating the enchanting verse – by turns assertive, observant, devout – of forty-eight nuns from sixteen centuries of imperial China. This selection of poems, along with the brief biographical accounts that accompany them, affords readers a glimpse into the extraordinary diversity and sometimes startling richness of these women’s lives.

A sample poem for this stunning collection:

The sequence of seasons naturally pushes forward,
Suddenly I am startled by the ending of the year.
Lifting my eyes I catch sight of the winter crows,
Calling mournfully as if wanting to complain.
The sunlight is cold rather than gentle,
Spreading over the four corners like a cloud.
A cold wind blows fitfully in from the north,
Its sad whistling filling courtyards and houses.
Head raised, I gaze in the direction of Spring,
But Spring pays no attention to me at all.
Time a galloping colt glimpsed through a crack,
The tap [of Death] at the door has its predestined time.
How should I not know, one who has left the world,
And for whom floating clouds are already familiar?
In the garden there grows a rosary-plum tree:
Whose sworn friendship makes it possible to endure.

Forty-eight Chinese Buddhist nuns of the fifth to the twentieth century are represented in this lovely book. Gratitude to Beata Grant for bringing the lives and poems of largely forgotten women into the light. These poems have not been published in English before.

It is wonderful to learn a little bit about the lives of these women, and to read some of what they wrote. Very down-to-earth mini portraits, with none of the mythifying typical of stories about male monastics who lived and wrote during the same periods.

The poems are also, for the most part, down-to-earth, simple, speaking of fundamental truth. This is not a collection of metaphysical poetry. Although the poems essentially hold to the traditional form and many conventions of (mostly Chan, but some Pure Land) Buddhist thought, often the individual character of a woman shines through in its honesty and simplicity. For example, the Chan nun Ziyong’s poem speaks of leaving the monastery for an extended visit to the south. Images of uncertainty and grieving are woven through the poem. The last stanza says:

« The Chan mind is not solitary as the wilderness clouds know.
Reed moon and plum blossom, to whom can I send them?
The sorrow of parting is real and difficult to leave behind,
But if the journey is in tune with no-mind, all will be well. » 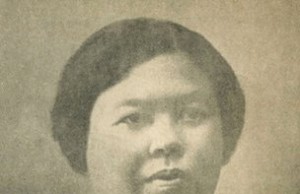