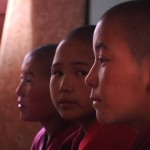 Many Tibetan Buddhists believe that one cannot attain enlightenment in the body of a woman, so why have these women dedicated their lives to this endeavor?

In the Shadow of Buddha takes us to the seldom seen world of Tibetan Buddhist Nuns and refugees in northernmost India. For these women the notion that a woman can be educated and that being born a female is not a punishment of past deeds is currently challenging thousands of years of history.  Through their voices we explore the paradox that being a woman within Tibetan Buddhism represents: that a fundamental spiritual equality does not equate in any way to equality in life.

The stark and beautiful images of Tibetan Buddhism seem as familiar as they are exotic, but there is a world more mysterious, beautiful and unknown that is not often witnessed by the eye of western enthusiasm. Beneath the icy mountains and whitewashed monasteries, In the Shadow of Buddha explores the world of three generations of these remarkable women.

But despite the popularity of the tradition, gender inequality remains embedded in the monastic culture of its Himalayan homeland. Buddhist nuns practicing in regions of northern India still inhabit a world infused with bias, prejudice, and even oppression.

In the Shadow of Buddha is a film that seeks to bridge the gap between the exotic and the familiar—between the issues and challenges of women in a far-off, foreign countryside and the recognizable struggles we all face in our personal, religious, and community lives.

Most nuns in the film proclaim themselves “weak” and “stupid,” professing their wish to be reborn as males. Young girls in this part of the world grow up believing that they have done something wrong in their previous lives to be burdened with the body of a woman. The word for ‘woman’ in Tibetan translates to ‘lower birth’.

The intimate stories of these nuns, told in their own voice without narration, articulate the inherent contradiction between cultural assumptions emphasizing that incarnation in a male body is necessary to attain enlightenment, and the underlying Buddhist belief that truth is ultimately empty, free of concept or category, and genderless.

The strength, dedication and love is what is apparent and the connecting tissue between these women in the film – their very simple yet powerful stories allay our desire to impart western notions of equality or feminism. Through their voice we come to understand that though facing incredible hardship and discrimination that these women exemplify Buddhist principle.

The exploration of Buddhism as a global religious tradition with its own gender and equality challenges has special relevance as our world reacts to the resurgence of fundamentalism and cultural traditionalism. In the Shadow of Buddha tells a multilayered, fresh, and engaging story about a universal and radical shift in the Tibetan Buddhist gender paradigm that is beginning to take place.

In a culture that still believes it is bad luck to have a daughter, the opportunities and self- respect of women, both lay and monastic, are increasing. In the Shadow of Buddha is a human story, a feminist story, and a story of equality shown through the unexpected lens of Buddhist nuns.

A New Beginning – The Saranaloka Foundation

In the shadow of Buddha 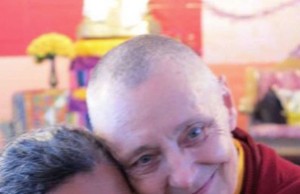